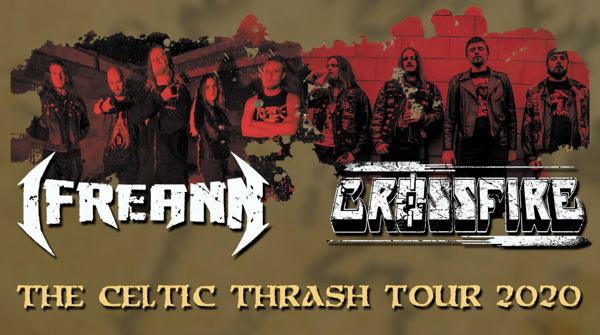 CROSSFIRE & IFREANN bring their 2020 UK/IRE tour to Glasgow this February.

Formed in 2013, CROSSFIRE have spent the last six years steadily building their reputation as one of Ireland's top thrash metal outfits. Releasing the EP 'Bound in Skin' and single 'Who Goes There?' in 2018, they combine sci-fi and horror lyricism with what has been described as "brutal, neck-snapping thrash"; pummelling, technical metal creating a sound reminiscent of the golden age of the genre, catered to the modern metal landscape.

Formed in 2015, IFREANN have been gigging none stop for two years, and released their debut EP ' Unearthly' in January 2019. Ifreann combine old-school Thrash ferocity with new-era attitudes to create a unique and pummelling sound. This show will co-inside with the release of Ifreann to-be-announced second EP.

NIGHT FIGHTER - Blackened Speed newcomers, armed and ready to curse the stage with their ferocious might!