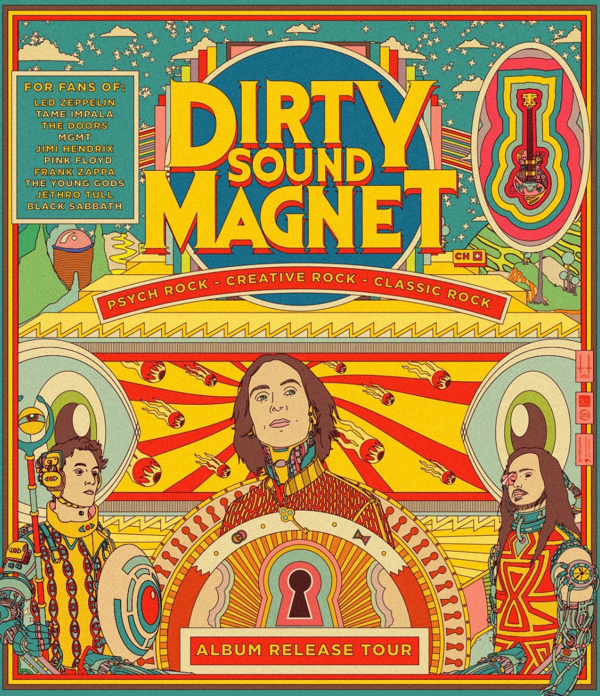 New full-length album ‘TRANSGENIC‘ out on October 18, 2019, on Hummus-Records

Dirty Sound Magnet is a psychedelic rock power trio from Fribourg, Switzerland. The band’s DNA can be traced back to the ancestral ‘Golden Age of Rock’ (60s, 70s), but it would be incorrect to think that DSM is...“retro”. The musicians are inspired by contemporary artists and modern production techniques; pushing the boundaries as they see fit. The results are personal, unique and original. Simply put: the Dirty Sound Magnet experience is a mystical journey back to the future…

In 2017, DSM released its third album, Western Lies, with Berlin-based label Noisolution. The results were instantaneous, with the band winning an award in the category of “best Swiss rock song” for their single ‘Homo Economicus’. Between 2017 and 2019 the band toured relentlessly, playing over 200 shows in various countries, including Switzerland, the UK, Germany, Holland, Belgium, France, Ireland, Austria, Italy, Hungary, and the Czech Republic. This hectic lifestyle didn’t diminish the creative output of the band, as the musicians decided to record a whole new album in the summer of 2018. What followed was an entire year spent producing their most ambitious and epic work to date, with sessions taking place across two tours and even on the road. The album, titled Transgenic, will be released on the 18th of October.